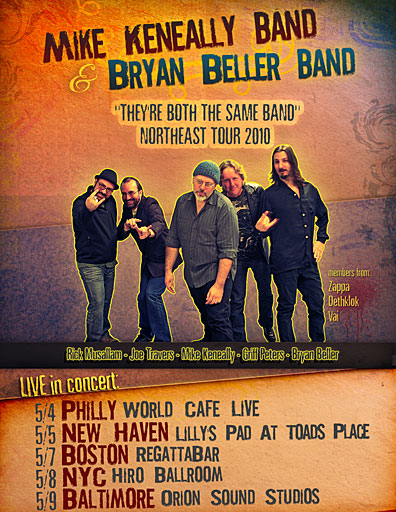 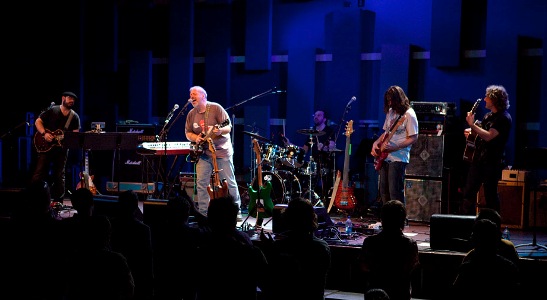 September 15 2010 – The Baked Potato, Studio City CA
Mike Keneally Band with special guest The Bryan Beller Band: THEY’RE BOTH THE SAME BAND
personnel: MK, BB, JT, RM, GP
setlist:
tape:
nb Both Bryan and Mike are preparing a live album and/or DVD release.
Kerry was there and he posted this review to ammk.

Man, what a fucking performance last night — I’m talkin’ about the
Bryan Beller and Mike Keneally “Both The Same Band” show at the
classic Baked Potato in North Hollywood, California. Griff Peters and
Rick Musallem on additional guitars, Joe Travers behind the kit.

It’s been several hours and a few years since I’d been privy to a
Keneally/Beller gig, and I can assure you now, I won’t let that much
time elapse ever again. Girlfriend dropped me off, met up with
SuperFan(tm) Stephane Peters (everyone in LA knows Stephane, “the
angry Frenchman”, ’cause the dude goes to every gig imaginable LOL —
awesome cat), had a nice potato dinner (sauteed mushrooms and cheddar)
and several beers.

As always seems to be the case at Keneally gigs, a pungent, sticky-
sweet skunk-like odor emanated from the smoking area out back; yeah,
it’s a Keneally gig for sure. Some damned fine stuff going around
these late-summer harvest days, I tell you.

I admit, I haven’t heard Bryan Beller’s latest, “Thanks in Advance”,
but the material showcased from said album really struck a chord with
me — the songwriting was gorgeous and there’s a maturation compared
to the writing on “View” in my most humbles. The title cut,
particularly, stood out as a highlight for me — kind of mellow,
languid, beautiful changes, and a really soulful Jeff Beck-ish solo
courtesy of Griff Peters. Bryan’s playing…what can I say? I felt,
for the first time, really, that Beller has truly come into his own as
a solo artist in his own right. There was a confidence and assuredness
to his playing that really touched me. Took me awhile, didn’t it?

After what seemed like a very short set (it wasn’t, really), I took a
reprieve on the patio, had a nice little skunk break, quaffed another
Miller Light(tm), then scurried back in time for Keneally’s shot at
stardom.

It was the set-list of my dreams; I can’t remember it all, but
imagine, if you will, the band opening with a stormy and passionate
rendering of the classic “Kedgeree”, Keneally just SMOKING the fucking
solo (he was amazing-amazing-amazing all night, incidentally), the
band so tight coins bounced off of ’em. Then one of my favorite songs
of all time, “Blameless (The Floating Face)” — oh my freaking GOD, I
love that song so, so much and to see/hear it presented live and in my
potato-stuffed face was akin to a spawning trout narrowly escaping the
toothy jaws of a young grizzly bear.

It just went uphill from there: hazy memories of a high-energy,
incredibly intense “Chatfield Manor”, the jaw-dropping “Pretty Enough
for Girls” executed beautifully, seguing RIGHT into a tree-
splintering, glass-shattering, Earth-heavy version of “Taster”. Holy
shit, the sheer weight of that piece floored me. The band fucking
nailed every nuance, too. Laughter-packed and spine-shivering versions
of “Life’s Too Small” and “Cold Hands” from SCAMBOT 1 (there were a
couple others from that album as well), a rockin’ closing version of
“Potato” appropriately enough. A bunch of other stuff I can’t remember
(should’ve snatched a setlist).

An incredible evening of music right there, I tell you what.

Mike was just so, so focused; I saw him squinting at the ceiling and
into the lights and I was thinking perhaps he was seeing the brown
triangles — sure sounded like it to these ears. An absolutely
flawless, completely on-fire, ultimately inspiring guitar (and
keyboard) clinic he put on. I’m still sitting here stunned over the
beauty of the man’s playing, his peculiar phrasing and insanely cool
and dissonant melodic outbursts, his tenderness and aggression, his
soul, his tone, his vibrato, all of it. Real, real humbling and quite
an amazing thing to have witnessed.

Musallem did his trippy pedalboard thing, throwing down a handful —
give or take a finger — of cool, ultra-melodic, classic Les Paul
guitar solos, so, so different from Keneally’s thing but no less
gorgeous. Travers is ridiculous, that’s all I can say. Man, talk about
driving the Greyhound! Beller and Peters did their respective things
perfectly and tastefully, the whole damned band psychically in sync
with each other.

Trust me on this one, the DVD the crew were shooting is gonna SLAY.

My only bummer was that “Evidence of Humanity” was for sale but I’d
pre-ordered and therefore have to wait a few more days. Poor, poor
pitiful me! However, I got to listen to the first 10 minutes or so on
the drive home with Stephane (he’d purchased it; he was also my
designated driver — thanks, Stephane!) and it sounded very, very
cool. Cannot wait to get my copy!

Anyway, it was an incredible, incredible night of world — no,
UNIVERSAL — class music delivered by some of the best motherfuckers
in the business in one of the most beautiful cities on the planet. All
sweet guys, too, very approachable and a bit on the goofy side, truth
be told. Great crowd (place was full as usual), too; reconnected with
some old buddies (hi, Kent and Susan!) and made some new ones (Hi
Chris!), and generally had myself a fine old time.

A bushel of gratitude and thanks to Mike, Bryan, Griff, Joe and Rick
— man, did you guys ever bring it, and I simply cannot thank you
enough for transcendant time we had.

October 23 2010 – De Oosterpoort, Groningen, The Netherlands
Steve Vai Festival featuring Steve Vai, the Noord Nederlands Orkest and Mike Keneally
performing Steve Vai’s and his own music on solo piano
personnel: MK
setlist:
tape:
MK notes:
As you know, I have to bust off from the Satch tour for the Glasgow and Birmingham shows (Jem Godfrey will be holding down the fort for me while I’m gone) in order to play my Steve Vai piano arrangements at the Groningen Steve Vai Festival– three tunes from Vai Piano Reductions Vol. 1, and three from the yet-to-be-recorded Vol. 2. I ran all six tunes in a row for the first time yesterday and, thank goodness, I know them all. As I’ve shared with you in the past, putting together these Vai piano arrangements always end up being the most painfully challenging musical projects I involve myself with, but I’ve got them down now to the point where I can actually play them and have fun with them. So these gigs are going to be good, I think. I’ll also be playing the arrangements on a radio program with Steve recorded before a live audience happening in the Oosterport Small Hall on Saturday, October 23 at 1 p.m., to be broadcast on Radio 6 at 11 p.m. on December 6 and 13, 2010. [source: the Keneallist Oct.13 2010]
The Groningen Vai festival was glorious, and after months of practicing and preparing for my performances therein, a massive relief to have finally pulled off. Many YouTube links exist of my performances, check them out if you like or wait until I get into the studio next year, with optimized arrangements informed by the lessons learned from debuting these arrangements live. [source: the Keneallist Nov.15 2010] 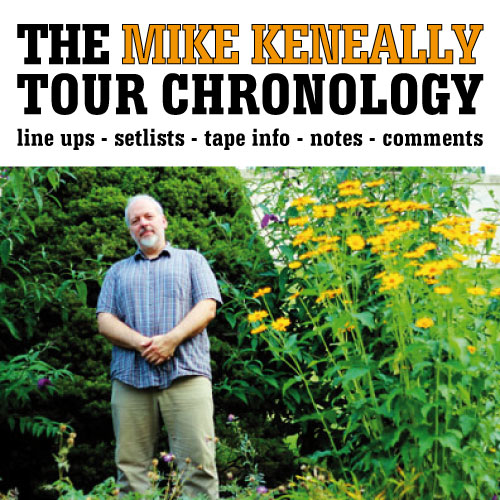