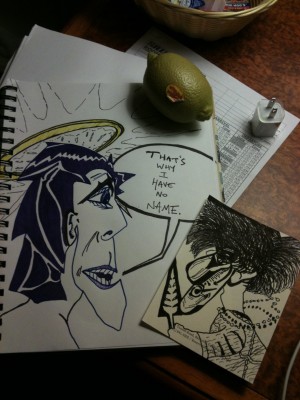 I found this sort of extraordinary: I left my iPhone charger at the hotel in Dallas. Didn’t realize it until we got to Houston. Yoops!

The day after Houston we (the Satriani band) were in Austin for a gig. NOW FOR SOME BACKGROUND: a couple of days beforehand, Kira Small put me in touch with an Austin musician named Steve McAllister, who wondered if I was available for a session when I got into town. There was no soundcheck on the day of the Austin gig, so I had the whole day free until 8:00 pm, and I told Steve “yup. Yup.”

He picks me up at the hotel and I ask him, “hey, you aren’t a Mac guy by any chance are you?” I thought he might know where the nearest Apple Store was so I could get a new phone charger. He reaches into the compartment between the front seats of the car and pulls out his Apple credentials – he works for the company. I do the session, his song is awesome, he pays me AND gives me a new charger. Things really go right sometimes.

To which you respond, “what do I care? What has this got to do with me?” Well, calm your ass down while I explain.