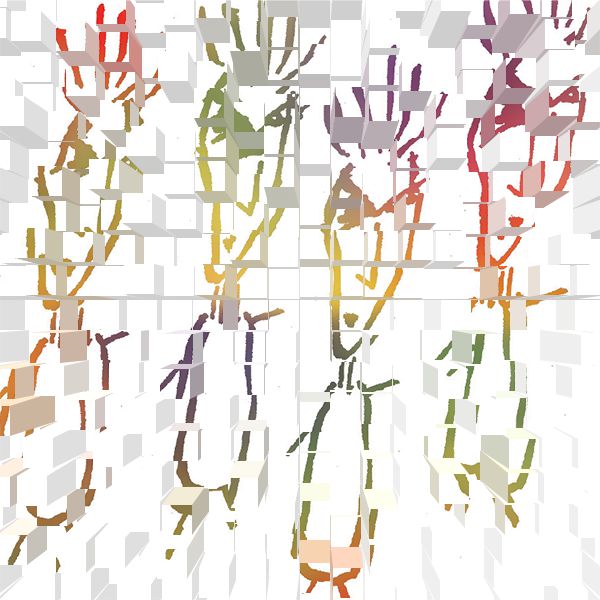 What would it be like if I said a few words about each track on Inkling, the second album which comes with the physical edition of Scambot 2?

This is a little scene-setting thing I recorded at home around 2008 or so. It was in fact meant to be the introduction to “Popes,” a song that ended up on You Must Be This Tall. In fact after YMBTT came out and I found this track in my files (under the name “Popes Intro”) I was a bit distraught that I hadn’t included it on that album – but now I’m glad I waited. I think that opening chord, and the odd cascades of melody which follow it, work nicely as a welcome into the world of Inkling.

It’s kind of funny that this song isn’t on the main album. It was a starting point for the entire series and was under consideration for both Scambot 1 and 2. I love Marco’s drumming on it, and the sound of the SG on the solo. Lyrically the song is a reminder to myself to meditate – maybe that’s why it didn’t end up as part of either of the key Scambot releases, because the message is so personal that it kept acting like a roadblock to the fictional narrative. I’m certainly very happy about its placement now. Everything on Inkling feels to me like it’s exactly where it’s supposed to be.

The synth tracks for the main body of the song were recorded for Court TV in the late ’90s at Lyle Workman’s studio, and the acoustic guitars, and everything in the coda, were done years later at Scott‘s. In its original unadorned form, it very nearly was the opening track on Wine And Pickles. When I sent an early version of the Wine And Pickles running order to my friend, composer/producer/radio presenter Co de Kloet, he said that “Boghe” sounded to him more like one of his own ambient compositions than anything particularly Keneally-ish. It is unusually spacious for me, and I think might provide some indication of what Scambot 3 might eventually sound like. The coda of “Boghe” is one of my favorite little bits of music I’ve ever written. It fades languidly away until…

…barges in like a plastic pineapple to the head. The basic track for this was acoustic guitar (me) and acoustic bass (Bryan), recorded in 2006 for a Keneally/Beller acoustic album that we decided not to complete (it was mainly to be duo versions of previously released tracks, plus four new songs: “Hallmark,” “DaDunDa,” “Land” and “Sickness”). Once I realized that this one didn’t need to remain a duo piece, I allowed myself to run rampant with the overdubs. There’s a lot of crazy, noisy stuff on this track, but my favorite section is the contemplative bit starting at 0:39. The first bass note that heralds the new section makes me more happy than is reasonable. And the three clean electric guitars that play the harmonized melodies in this section sound like dreams come true to me.

“Sickness”/”The Coma” were going to be a set-piece on Scambot 1, but the plotline never made room for them, so I didn’t bother finishing them at the time (if I had they would have ended up on the bonus album Songs And Stories Inspired By Scambot 1). The basic track for “The Coma” went like this: me writing the main rhythmic motif on my Charvel guitar, and showing it to Marco, and then me conducting the ensuing composition by jumping up and down and contorting my body while playing variations of the main motif, and Marco orchestrating my spasms in real time. That was recorded in 2006, and I spent a good part of the next nine years on and off with Mike Harris ladling gallons of guitar and other overdubs onto it, then painstakingly tweaking the proportions. I have so many mixes of this in my laptop it could practically be its own album.

This little kitten was very nearly going to be the second song on Scambot 2, as a major left turn after “In The Trees.” Evan’s flute sounds great, and coming as it now does after “The Coma,” it is a major left turn, and it also nicely ushers in “Chunk 2” of Inkling (check out the back cover of the Inkling booklet to see how I think these pieces group together in four chunks. Maybe four sides of a ten-inch pair of 45-rpm discs?).

Don’t know why I called it “Falafel,” other than I think it’s a cool looking word. This was actually the original ending of “In The Trees,” before it became clear that “In The Trees” was more effective at a trim, concise 10:28. “Falafel” is a return to the groove heard behind the guitar solo at 3:30 of “In The Trees,” but taken at a slower pace for a heavier grind. It’s a good jolt of adrenaline for Inkling.

Another synth soundtrack excerpt from the Court TV recordings, heavily modified with guitars. The twisty guitar riff that comes in at 0:19 shows up again on the piece “O” from Scambot 2. I like how much ground “O Elastic Love!” covers in such a short span of time, and the piano solo at the end is one of the most personally satisfying keyboard solos I’ve ever played.

More than any other song that didn’t make it onto Scambot 2, taking this one off kind of broke my heart a little. I really, really, really like “Cram.” It’s based on the same guitar tuning I used for the song “Weekend” (D A C F# B E, an open D13 chord), specifically because I wanted to be able to go directly from “Weekend” into another song (or the other way around) during a gig without having to switch guitars. The day after the Keneally Band rehearsal for NEARfest 2012, only Kris Myers, Rick Musallam and I remained at Chatfield Manor, enough people to get “Cram” (and “Roll”) off the ground. The initial “Cram” jam lasted well over half an hour. The groove on this thing is supremely exhilarating to me. I’ve spent hours blissing out listening to rough instrumental versions of it. When I sent an early version to Kris Myers, he declared it to be cramtastic.

There are so many things I dig about it: Ben and Jesse‘s vocals, the synth bass, the absolutely insane and masterful Kris Myers drum performance, and the interplay between my and Rick’s guitars. (And I may have mentioned before that Rick’s name was accidentally left off the credits of this song? One of the things I will do in the future, believe you me, is to write an essay specifically about all the wonderful things Rick plays in this song. Until that time, strap on your headphones [make sure you’ve got them on the right way] and pay special attention to all the little Les Paul chatterings on the right side of the mix. Beautiful.)

Well that’s half the album and it feels like a good spot to take a breather. I’ll come at you soon with words about the second half of Inkling. Y’all are freaking sweet people. Have some green beans, man, they’re good for you.

Lozenge,
Mike
PS. We just added a couple of Baked Potato gigs to the end of the Mike Keneally & Beer For Dolphins tour in October/November (see keneally.com for tour dates). They’re on Sunday November 6 and Tuesday November 8 – the second of which is Election Day in the US. I think we’ll all be in the mood for a blowout gig that night. On Sunday it’ll be the Keneally-Beller-Travers trio, but on Tuesday it’ll be Keneally-Musallam-Beller-Travers as we gleefully welcome Rick Musallam back into our ranks.

For the moment, the Scambot 2/Inkling 2-CD limited edition is only available through Exowax. It will go into wider release, through other distributors and retailers worldwide, starting in September.