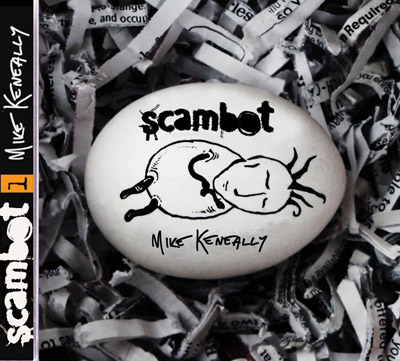 Calling the first volume of Mike Keneally’s Scambot trilogy “ambitious” might be understating things a bit. For five years Mike held it close to his heart as his main project, employing nine engineers and many musicians at six studios.

“We devoted intense energy to every second of the album,” says Mike. “There is a plot, and a bunch of characters. The CD booklet contains a very long story I wrote which lays out all of the action. Musically speaking, it’s about two-thirds instrumental. It encompasses a little bit of straightforward-ish rock and pop, a lot of rigorous composition and arrangement, some obsessively intricate vocal and instrumental harmonies, some improvisation which has been orchestrated, some digitally-manipulated musique concrete, some purely uncategorizable stuff and, I think, some of the most interesting melodies I’ve come up with. It is a peculiar album but I think very satisfying as a journey, and emotionally it hits a lot of different moods.”

And here’s another clue for you all: Scambot 1, Mike adds, is “dedicated to anyone who still listens to entire albums with their headphones on.”

The video for Hallmark: 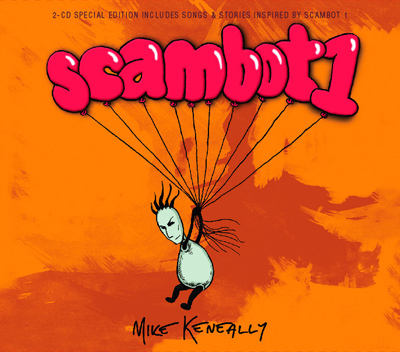 The Scambot 1 Special Edition includes the complete Scambot 1 CD, plus a second 53-minute CD crafted by Mike entitled Songs & Stories Inspired by Scambot 1, all packaged in an attractive Atticus Wolrab-designed slipcover made of genuine cardboard. This Special Edition is made even more special because Mike is individually numbering and signing the first 3000 copies!

Here’s what Mike has to say about Songs & Stories Inspired by Scambot 1: “This is a very uncompromising album, with a lot of guitar improvisation, demanding sonorities, alien vocal textures, truly insane song structure and many crucial pieces of the Scambot plot continuity. Plus a very entertaining credit sequence. If you are intrigued by the conceptual world of Scambot, it’s heavily advisable to hear both albums.” The great majority of the music on Songs & Stories Inspired by Scambot 1 is unique to it; three of the pieces are remixes of songs from Scambot 1, plus one demo.

A fourteen-and-a-half minute ornament for any holiday season, written, produced and performed by Mike Keneally. Contains two new songs, “Holiday Face” (recorded specifically for this project) and “Salve-Dependent Scorpions” (an alternate take from the Scambot trilogy), framed by three short narrative pieces (as they might have appeared on some surreal alternate-universe ’60s TV holiday special).

The download includes a short PDF file with artwork and notes.