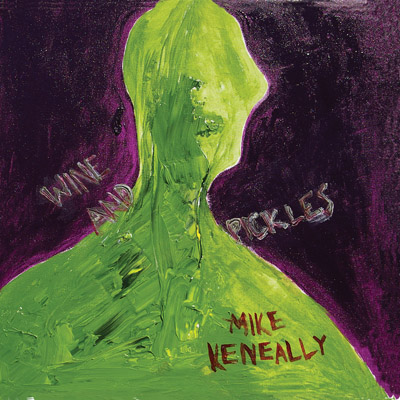 Studio recordings 1998-2006
Being a collection of unreleased things, rarities and allsorts from the last several years or so

[Four stars] “Keneally’s guitar work is of the highest order, and his shrewd production values hold true in the most informal settings. From structured rock tunes to solo piano improvisations and orchestral interludes, he consistently leads the way with studied and earnest musicianship. Keneally’s standout guitar, vocal and production skills all come together on beautifully arranged tracks like ‘Feelin’ Strangely.’ His postmodern approach allows for a bold assimilation of influences, as evidenced by the dynamic closing track, ‘The Endings Of Things.’ Keneally is sustaining the Zappa legacy as well as anyone in music today. Frank would be proud.”

Mike describes Wine And Pickles as “the album I didn’t know I was making over the last ten years.” Lovingly assembled from a wide array of archived sources, W&P serves as a surprisingly cohesive alternative history of Keneally music. Notable among the 21 gems are the legendary original version of “Backwards Deb;” “4S,” a piece written for Holland’s acclaimed Metropole Orchestra; “Inhale,” a gorgeously melodic collaboration with Lyle Workman; and “The Endings Of Things,” a stark, confessional performance from 2000’s Dancing sessions. The CD contains an eight-page booklet with Mike’s original artwork, pithy personal notes about each song, and lyrics.

Mike describes the genesis of the track: “Lyle [Workman] composed, performed and produced the instrumental backing track by himself, then asked me to write a vocal part for it. His track was so fantastic, I could hear the vocal parts screaming at me just listening to it and I had the lyrics and melody written inside of a couple of hours. It was recorded in 1998, and released in 2000 on Lyles brilliant second album. Ive gently begged Lyle to record an albums worth of killer instrumental tracks that I can stick vocals on, but hes been busy providing the soundtrack to the Judd Apatow cinematic empire– and good on him Lyle is entirely a genius and a sweet man and deserves all great things.”

If you’re interested, here’s the text I was forced to sing and/or recite along with the entire 40-minute track, lest I be subjected to the fiendish whims of studio-invading Norwegian hooligans:

Dear Mr. or Ms.,
There are five things –
Five things in a total of four languages –
The first one is a parable:

“Hair from the beards of the gods found!”

These are the words which Hillary Duff
said in her pay-per-view concert
Witnessed by something like 70 million
as she transformed into Queen Of All Lizards
Snacking on audience heads.

closed-circuit high-definition big-screen therapeutic…
What you make of all this, Bob?
Well, Vinny, I’ve been working this desk for 49 years.
You know the things I’ve seen. But first, this story:

I will taste this glory.
I will absorb the grandeur of this day like a Def Leppard remix.
You and me, Vinny, in a bubble of eternal hooray…
That’s the second thing.

Tired brain.
Good and fried from ear to ear.
We, the undersigned Norwegian hooligans,
Propose the following regimen:

Our strength insults the world
And everything beyond

Karma kareens, returns,
Don’t have to like the taste

(I say “Thank you! Thank you, Norwegians!” and sing along until the end of the piece.)

Nothing like a new finial to spruce up the joint

Go to Keneally.com for the first new edition of Mi

All the info is at greatguitarescape.com - 4 nigh