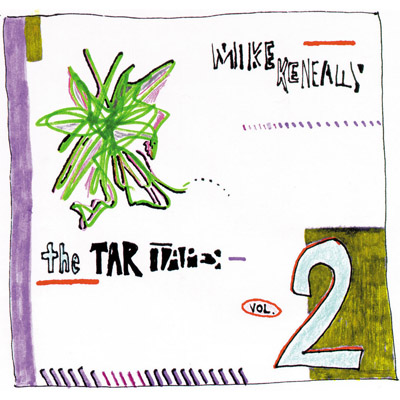 The second collection of 17 songs from Mike’s infamous past. It’s been out of print for a long time, and now it’s available exclusively via download. Also included is an eight-page digital reproduction of the original CD cover, liner notes and lyrics.

Mike’s comments (1998):
The second CD collection of songs from my infamous past. This was compiled at the end of May ’98, the most significant month of my life musically, and it was great fun to arrange pieces of my old self according to a schematic arrived at by my new self. It turned out real well. This is the album which made Paul Hinrich decide to like me once and for all.

It’s a limited edition of 1000 signed, numbered copies; one special copy contained an extra CD with the song “The Most Paranoid (of What We Don’t Know),” a soundboard recording from a 1989 Drop Control club gig. As of today (January 7 or 8, 1999) Immune still has copies of “Tar Tapes Volume Two” in stock, and it has also just been released by MSI in Japan (they also released “Volume One” in Japan during 1998, which is good news for anyone who didn’t buy one of the 500 copies Immune originally made available).

The package for this CD contains an insert with fairly exhaustive liner notes, so rather than repeat it, here’s some basic information about where and when the songs came from – if you want to know more specifics about the material before you buy the album, just buy the album.

The original five cassettes went through various artwork permutations during their existence. A very limited cassette release was prepared for the Japanese market shortly after the tapes were withdrawn from the American market. If you’d like to see the artwork I did for the Japanese issue, click on the individual titles below.